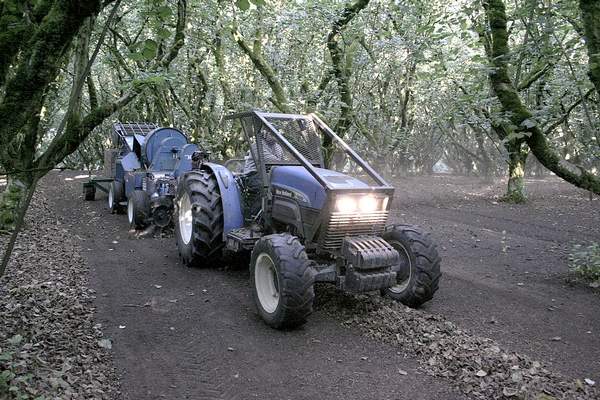 Oregon farmers will receive at least 96.5 cents per pound of hazelnuts this year, a decrease of 18 percent from last year’s initial price.

The price slide comes at a time when hazelnut growers are also expecting lower yields, with Oregon’s total production projected to be 36,000 tons, down from 44,000 tons last year.

“With a small crop it’s going to be tough for everyone,” said Doug Olsen, farmer and president of the Hazelnut Growers Bargaining Association.

Price fluctuations in Oregon are influenced by the hazelnut crop in Turkey, where low yields caused by a deep freeze drove up the domestic price to $1.70 per pound in 2014, the highest on record.

A bumper Turkish crop in 2017 has had the opposite effect on Oregon’s initial price, though farmers could still end up with a higher price if processors receive premiums.

Whether farmers will make a profit this year varies by individual, since people have different levels of debt and establishment costs for their orchards.

“It kind of depends where you are, how mature your orchard is,” said Nik Wiman, an Oregon State University orchard specialist.

According to a conservative estimate by OSU, farmers who plant the popular Jefferson variety earn a profit in the seventh year of orchard production at prices of $1 per pound, he said.

At roughly $1 per pound, farmers in Oregon will probably still be motivated to continue planting the crop, said Olsen.

“It might slow down a little bit but it’s still one of the better-paying crops right now,” he said.

Negotiations among farmers and hazelnut processors dragged on longer than normal in 2017, with the parties winding up in mediation to set an initial price.

There was some disagreement about how high the price could rise without hurting demand, particularly in China, a major market for Oregon’s crop, said Terry Ross, executive director of the Hazelnut Growers Bargaining Association.

Ultimately, data from the Oregon Hazelnut Marketing Board showed that China’s demand for our hazelnuts is “elastic,” meaning that higher prices would curtail purchases, Ross said.

“Once all the factors about market conditions were presented and discussed, there was no other solution than the price that was set,” he said.

Jeff Fox, executive director of the Hazelnut Growers of Oregon cooperative, said he was disappointed by the price decline, since the industry has seen large Turkish crops before.

Oregon producers have the opportunity to earn a premium based on growing higher quality hazelnuts than those grown by Turkish farmers, he said.

“Hopefully this doesn’t impact their behavior as far as planting but I suspect it will,” Fox said of domestic growers.

While the price has fallen since 2016, this year’s initial price is nonetheless the sixth highest on record, said Larry George, president of the George Packing Co.

Profitability in 2017 will be determined by production, which shows the Oregon industry should invest in increasing and stabilizing yields, George said.

Hazelnuts have relatively low labor costs and good returns for farmers, he said. “Our view is the best years for the hazelnut industry are still in front of it.”