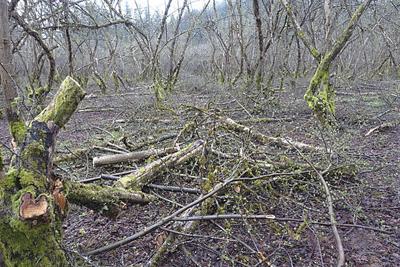 PORTLAND — Millions of dollars of disaster aid is now available to Oregon hazelnut growers who suffered crop losses in February 2019 as a result of severe snowstorms that damaged up to 12% of mature orchards in the southern Willamette Valley.

Congress approved a $19.1 billion relief package in the wake of multiple natural disasters across the country, including hurricanes Michael, Florence and Dorian, as well as major floods, tornadoes, heavy snow and wildfires.

Part of the spending bill set aside $4.5 billion for agriculture, timber and watershed recovery to assist farmers and ranchers. The emergency fund — named the Wildfire and Hurricane Indemnity Program-Plus, abbreviated as WHIP+ — contains $11 million for Oregon hazelnuts.

The USDA Farm Service Agency announced March 16 it has established payment rates for hazelnuts through the program, and is accepting applications from eligible producers.

Kent Willett, farm program specialist for the FSA in Portland, said the program is unique in that it provides some compensation for damaged trees in addition to a percentage of the crop value. Payments are limited to $125,000 per farm.

“We’re just now trying to get that out to the public,” Willett said.

Nearly all U.S. commercial hazelnuts are grown in Oregon. A report by Pacific Agricultural Survey estimated 3,332 acres of mature hazelnut trees in Lane and Douglas counties were at risk of winter storm damage in 2019, out of 27,603 total mature acres.

Areas around Eugene, Ore., experienced 20-plus inches of snow over three days, causing limbs and branches to snap and, in some cases, entire trees to fall. According to the report, older orchards experienced a much higher level of damage from snow and ice due to their limb shape and structure.

Garry Rodakowski, chairman of the Oregon Hazelnut Commission, was one farmer who saw significant damage at his orchard west of Eugene along the McKenzie River. He said snow blanketed about 60 acres of trees, cutting his production by about 55%.

“Plus, all the expenses on top to clean up and everything that went along with that,” Rodakowski said. “I still have broken limbs that I can’t reach from the ground, or with a pole saw that I would have to (reach) in a pruning tower.”

Though he is not certain how much money he will receive, Rodakowski said the financial relief is a huge deal to growers.

“I’ve been in the industry for 50 years. This is the first time I’ve gotten any government funding for disaster relief,” Rodakowski said. “I still don’t know what I’m going to get, but you’re at a point where anything will help.”

Juli Jones, grower relations director for the Oregon Hazelnut Industry, said she is notifying growers about the program.

While there is no deadline yet for applications, Jones said growers must schedule an in-person appointment at their county FSA office.

“The applications are being processed as quickly as they can,” Jones said. “The sooner, the better on this.”

The new program is different from other aid programs such as the Tree Assistance Program or Emergency Conservation Program. Producers who may have applied earlier through TAP or ECP must apply again specifically through WHIP+ to receive payments, Jones said.

“We stress to them that if you think you’ve applied for it, you haven’t,” she said.

In addition to hazelnuts, WHIP+ includes $3 million for Southern Oregon winegrape growers unable to sell their 2018 crop over concerns of smoke taint from the region’s wildfires.

A California winery rejected 2,000 tons of winegrapes from Rogue Valley growers just before harvest, worth an estimated $4 million. Due to the timing, most fruit was left to rot on the vine.

Wildfire smoke can have a negative impact on vineyards, with grapes absorbing volatile guaiacol and methylguaiacol compounds that can lead to smoky, burnt or ashy flavor in wines.

Sen. Jeff Merkley, D-Ore., the ranking Democrat on the Senate Appropriations Committee, was instrumental in getting hazelnut and winegrapes included in the relief package.

I cover issues affecting Oregon agriculture. Have a news tip? Let me know!