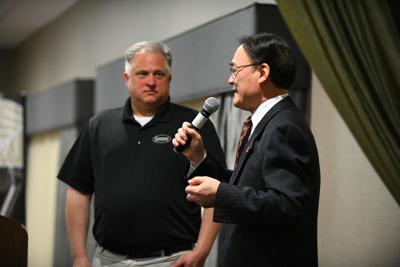 Donghua stressed the need for the U.S. and China to see each other as economic partners rather than adversaries. He characterized the “phase one” trade deal between the two countries as a step away from the wrong direction.

“Any move to decouple our economies will result in huge costs for both sides,” he said.

China’s domestic consumption of all goods by value is already approaching that of the U.S., but with a larger population, the country’s potential for agricultural imports is certain to expand, he said.

“We cannot produce all we need,” Donghua said.

Aside from being a “huge honor,” Donghua’s visit is a positive omen for the hazelnut industry’s request for a waiver from Chinese retaliatory tariffs imposed on U.S. farm goods, said Larry George, president of the George Packing Co., which organized the event.

Major commodity crops, such as soybeans, have a powerful voice in the waiver process so the hazelnut industry must ensure it’s not ignored, he said.

“It’s kind of like, ‘Who is yelling the most?’” George said.

In 2018, the Chinese government imposed retaliatory tariffs of 40% on U.S. hazelnuts, which are predominantly grown in Oregon, on top of the 25% rate already faced by the crop. Meanwhile, gray market routes through Hong Kong and Vietnam that circumvented the tariffs were shut down.

Under the phase one trade deal announced in January, China agreed to ramp up its annual imports of U.S. farm goods to about $40 billion a year, or roughly twice the amount that was shipped in 2017 before trade hostilities began.

To take advantage of the deal, the hazelnut industry can seek a waiver of the 40% additional tariff imposed in 2018, George said.

Because hazelnut packers now send the crop directly into China, they’re no longer restricted to the 500-600 containers a year that gray market channels could handle, he said.

Those 500-600 containers generated about $35 million in sales, but the industry could ship roughly three times as many containers directly — that’s about $100 million worth of hazelnuts — if retaliatory tariffs are dropped, George said.

The outbreak of the coronavirus has created an unexpected impediment to lobbying efforts, since U.S. industry representatives must cancel planned trips to China, he said.

George said he’d love for the Chinese to make a decision in 2020 but expects that hazelnut growers will get a determination in time to sell this year’s crop in 2021.

The market price for last year’s crop has been buoyed by problems in Italy and Turkey caused by the brown marmorated stink bug, which has reduced production in those areas by as much as 30%, said Shaun George, chief operations officer at George Packing Co.

The same pest is already harming hazelnut growers in Oregon, however, and could similarly decrease yields if the industry isn’t proactive in battling the insect, he said. “It starts with denial — denial that it will affect you. Then suddenly it does.”

I’ve been working at Capital Press since 2006 and I primarily cover legislative, regulatory and legal issues.